With my chest pressed firmly against the warm rock and my arms spread wide… I somehow managed to yell back to Kyle.

“Not really sure yet. Hold on.”

Although the tips of my fingers clutched tightly to the alpine rock… my body was relaxed and my breathing remained calm and steady. I took a deep breath, exhaled slowly and committed to the move. I safely made it to my destined rock and smirked to myself. I shouted over to Kyle across the jagged rocks…

I stood in silence at 14,000ft soaking in the moment. Usually these transient moments are the ones you recognize in hindsight… but I was completely and utterly aware that this particular moment was special. I was a happy Sisyphus. 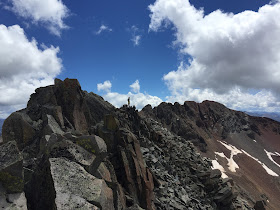 When I first started trail running in 2009… I actually had no idea what the hell I wanted from the sport. I simply had an overwhelming desire to get outside, move and explore the world’s landscape in the simplest form possible.  For me personally… nothing has ever really been about the “prize.” I didn’t play college baseball to win a championship in the same way I didn’t set out to run trails to stand on a podium or even compete in races. My All-American and Hall of Fame plaques are somewhere tucked in a closet while there’s a beat up shoe box under one of our guest beds that houses every buckle, medal and finisher award I’ve ever received from past running events. Even though I didn’t completely know what fueled my desire to run trails in the beginning…  over the years I have found that to have a real, raw, unfiltered, pure experience has ALWAYS been the driving force behind all of my trail running and life adventures.

Over the course of my short 7yrs of trail running… I can count 4 distinct instances in which have touched or lit a fire within my soul. Out of these 4 adventures… I was only actually involved in 2.

It is common practice in the Andrews household to set out on a “store hopping” adventure. Occasionally we will set out to town, grab some slightly-less- than-nutritious but oh-so-delicious food from our favorite fast food establishment and proceed to binge-bounce from store to store. We rarely walk away with anything more than a good conversation and a cup of coffee, but it is always some of the most fun and relaxing times we get to spend together. One of our favorite places to hit is Books-A-Million. Kati will usually venture into the land of the paperbacks while I head straight to the magazines to drool over beautiful pictures of alpine running and mountain cabins.

On a late summer evening back in 2013… we set out on a “store hop” and ended up at Books-A-Million. As I thumbed aimlessly through glossy pages… an article with the big bold words “Drunk on cheap bourbon” caught my eye. In a nutshell… the article was about 2 ultra-endurance personas that would do a yearly adventure together.

“An event without sponsors, entrance fees, support tents or bumper stickers. No finishing medals. No belt buckles. As far as fans, your wife, if she’s bothered to stay awake, might meet you at the finish line… which is your doorstep.”

The more I read, the more I became intrigued. By the end of the article my head was spinning with all kinds of crazy, exciting possibilities for adventure.  Up to that point in my trail running life… I had only known about races. But this simple article about 2 guys fabricating their own adventure and making their own rules was EXACTLY what I was looking for out of trail running. Real, raw, unfiltered, pure experiences without the worldly external validation. Thanks Brock and Sam. The magazine sits on my nightstand and I STILL read that article almost weekly.

A few months after reading the magazine article… I found myself in the midst of a 69 mile fun run… sleep deprived riding a stick horse at 3am somewhere in the middle of the Western North Carolina mountains. 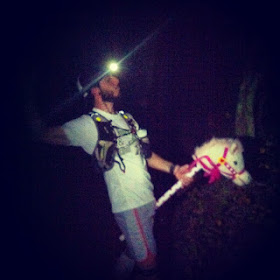 Pitchell is a self-supported fun run that starts on a Friday night at midnight and runs from Mt Pisgah summit to Mount Mitchell summit. It’s a hard, super low-key, grass roots and a pure adventure that is more or less an “invite only” type of run (but of course you could go out and run the route any time you wanted). 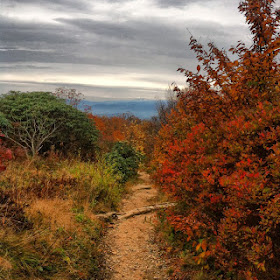 To this day… finishing Pitchell is the single most defining moment of my trail running life. I can still vividly recall almost every single detail of that entire weekend: the strong smell of fresh, bold coffee after waking up on a coach in Atlanta early Friday morning... the run up Rabun Bald to break up the long drive to Asheville... sitting on a familiar stranger’s living room floor eating pizza, drinking beer and listening to a kindred soul strum the guitar while waiting our midnight run departure. I remember the excitement in Erin’s voice as the clock struck midnight on Mt Pisgah... the nervousness in her voice as we stumbled through blinding fog in search of a white blaze... and the disappointment in her voice when she made the decision to bail at the halfway mark because of the ankle she destroyed as the sun was rising. I remember the cool, crisp October breeze flowing through the bright colored autumn trees and even the moment I decided to wander off the trail to kick a stump just to prove to my delirious mind that it was not seeing a monkey. (it was not a monkey... it turned out to be a stump). 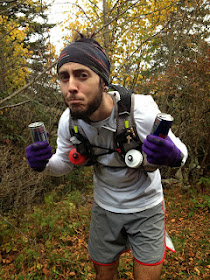 But the moments I remember the clearest are the ones that came at the end. After 18hrs48mins I reached the summit of Mt. Mitchell. There was no finishers chute, no one there to hand me a buckle or a medal… hell there wasn’t even a view! I was engulfed in a grey cloud, shivering from cold windy gusts. 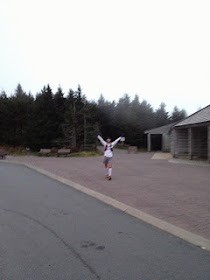 The only “prize” I received was a “great job” and a huge bear hug from the mastermind behind Pitchell. This run SOLIDIFIED the type of trail running and adventure that truly spoke to my soul. Thanks for the real, raw, unfiltered, pure experience Mad A.

The MOMENT Mike Foote and Mike Wolfe announced their intentions surrounding the Crown Traverse I became glued to every social media/website that would be updating their progress. Because of their pure love and passion for all sorts of different mountain adventures… I’ve been a massive fan of the Mike’s for years. I feel as though I shouldn’t have to explain why their Crown Traverse moved me… just watch... you'll understand.

Way back in February… a few hours before registration opened for the Telluride Mountain Run… I had sent Kyle a text message. I can’t remember exactly what the text said but it was something along the lines of:

Zach: “Hey dude… there’s this low-key race out in Telluride later this summer. It’s 38ish miles, has about 14,000ft of vertical gain, is super minimal and is supposed to be gorgeous…”

It literally was that simple.

On paper... the Telluride Mountain Run seemed like it was right up my alley. It was described as being hard, minimal (only aid was at mile 16, 26 and 31) and beautiful. It did not disappoint in ANY aspect! 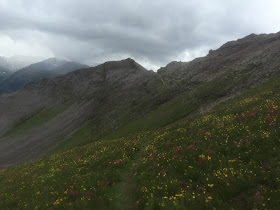 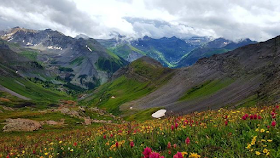 Attempted to ski down the snowfield at 13,000ft and followed pink flags and rock cairns… 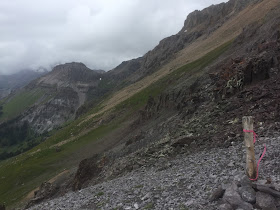 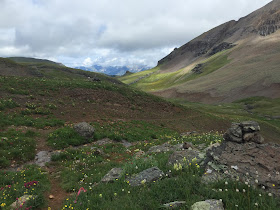 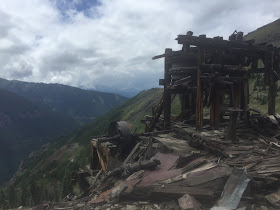 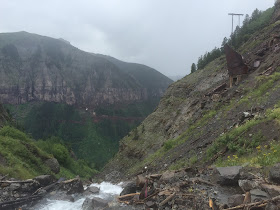 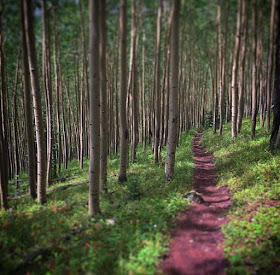 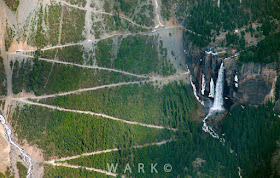 It was simply spectacular. Although I strained my achilles during the first 4,000ft climb and didn't have the race I had intended… I still had a solid race and soaked in errrrything the San Juans had to offer. TMR has officially gone down as my all-time, hands-down favorite race. If I could race one race for the rest of my life… TMR would be it. No joke. Thanks Dakota. 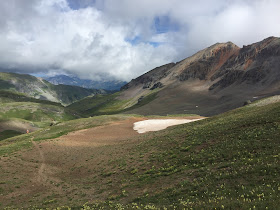 The morning after TMR… I zipped up my Thermoball jacket and stumbled out of our borrowed tent into the cool, thin Colorado air. I walked around our camp at 9,200ft trying to work out the stiffness from the 40 challenging mountain miles the day before. 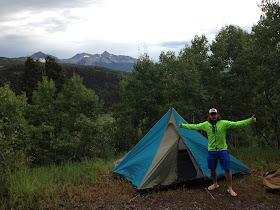 We packed up our rental and headed out of Telluride.

And made our way to the Kikpacker trailhead. 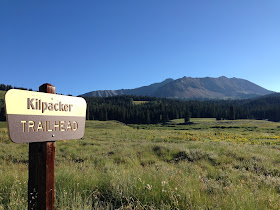 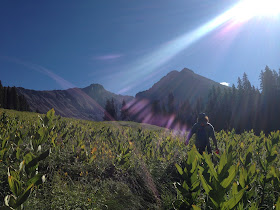 Soon we were well above tree line and hiking along loose rock. 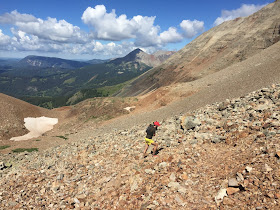 Neither of us had ever summited a 14er before so we wanted to make our first summit special by attempting one of Colorado’s 4 Grand Traverses: the adventurous El Diente – Mt Wilson Traverse. We had planned to hit El Diente first and then follow the ridge over to Mt Wilson. 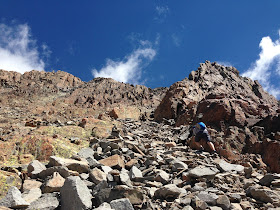 Since we did not have helmets… we took 2 separate paths once we started to climb so that neither of us would take a loose rock to the head. 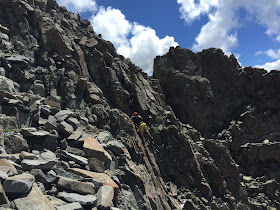 We separated pretty quickly as we climbed. 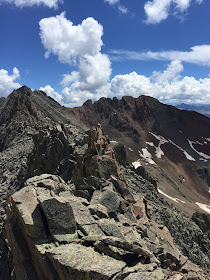 I took a route that veered off to the right around a few sharp ledges that eventually placed me on top of the ridge line.

Kyle: “So yea… some of this next section is pretty sketchy…” 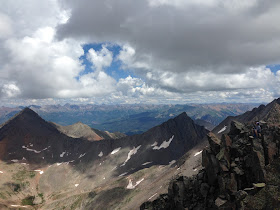 After making a few sketchy (but somewhat safe) moves on the route that Kyle had taken… I decided to drop back down to the actual trail and meet back up with Kyle for the final push to the summit of El Diente. The summit did not disappoint… 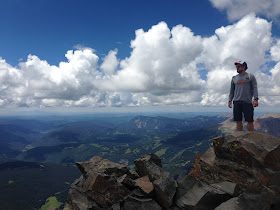 Darkening clouds on the horizon resulted in the unanimous decision to nix the traverse and make the descent back to the car. 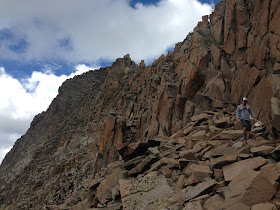 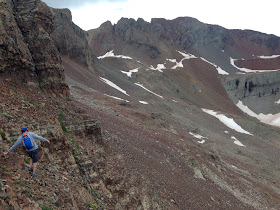 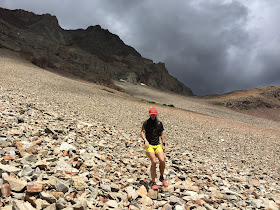 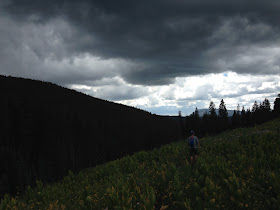 We REALLY knew we had made the right decision when we started getting pummeled with hail! 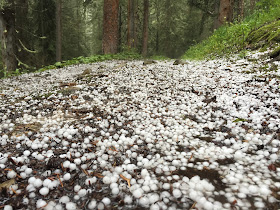 Thanks for the real, raw, unfiltered, pure experience Telluride. 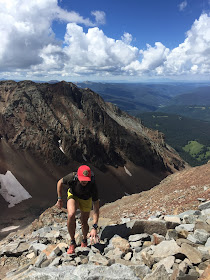 These are the 4 adventures that have shaped my mountain mindset.

My ultimate goal is not to train to run faster than anyone else or to collect a bunch of hardware. I don’t take a lot of pictures and post on social media to receive external validation. I train so that I can experience the majesty of the mountains in the purest and simplest way possible. I take and post pictures so that I can recall the way certain outings/days/adventures/people made me feel and to show the beauty of the world in which we live through my perspective.

There's no right or wrong way to do these adventures. Everyone has their own way, rhyme and reason for being out on the trail. Some people love the race scene... some people do it for the "bling"...  some people love the online/social media aspect... and some people just want to be a part of the amazingly supportive trail community. Whether it be a one mile fun run or a 100 mile race... as long as you are being 100% true to yourself and real... you've got my full support.

But as for me... I just want that exhausted, used up, euphoric feeling you get after a long day of moving through rugged terrain under your own power. Real, raw, unfiltered, pure experiences with real, genuine people. That's really all I want. And maybe a good colbeer. ;) 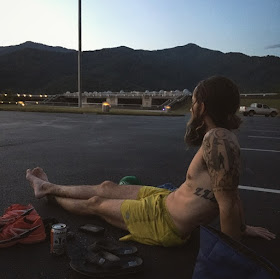 "There's a lack of realness in our reality now. Every experience is manufactured, filtered and produced... which is why so many of us are finding such catharsis in the mountains. Mountains aren’t anything but real… they can’t be anything but real." - Famous J